Signage in the Town Center

The manner in which signage is handled in the Town Center will have a significant impact on the district's character. Two goals of the district were to encourage pedestrian activity and promote a higher urban design. 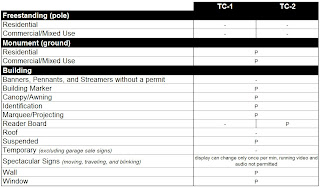 The proposed code makes several changes to the existing sign ordinance for TC-1 and TC-2. The most radical is the elimination of freestanding signs. This proposed change will limit primary signage to monument or attached configurations. Another noteworthy change relates to video boards on signs.

Within the town center, these and other "spectacular" signs will be permitted only with static images. Signs will not be allowed to change more than once per minute under the proposed ordinance. This restriction will also cover blinking or traveling lights. Video and audio are not permitted. Banners and other temporary signage will only be permitted with a sign permit which complies with the allowable square footage totals for the site.
Posted by BPS Christopher at 8:55 AM