The previous post focused on land use within the proposed zoning ordinance. This post will discuss the dimensional requirements in the proposed code, specifically those dealing with land use. These regulations, combined with land use, helps to differentiate between "high" and "low" intensity and density sites.

The consultant team has produced several graphics which may help to illustrate the residential tables. These graphics are a WORST CASE SCENARIO, not the recommended neighborhood design. Still, the graphics do represent what could be developed under the code. The first graphic conforms to the Residential Low Density (R-L) district. Homes were placed at the minimum setbacks from each other and the street. The lots are also drawn as small as possible within the R-L district. 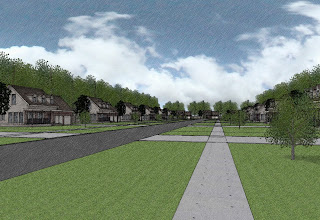 The second drawing illustrates a possible development scenario under the Residential Medium Density District (R-M). Again, the drawing can be considered the base-line for development. Homes are again placed as close together and to the street as possible. Lot size (3,600 square feet with 50 foot wide lots), lot coverage (30%), etc. are pushed to produce the highest possible number of hypothetical homes. Both of these drawings are included not to scare citizens, but rather to illustrate what the numbers could look like graphically. As mentioned, the numbers were based on public involvement during this project as well as during the Vision 2020 Comprehensive Plan program. The existing zoning ordinance and calculations of existing Whitehouse neighborhoods were also utilized to fine tune the proposed ordinance. 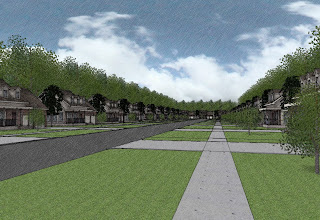 Specific areas of the residential table which should be considered include residential density. The proposed densities, ranging from less than one residential unit per acre (for Agricultural Open (AO)) to 20 units per acre (for Residential High R-H), are based on public involvement. The recommended densities also comply with those first discussed in the Vision 2020 Comprehensive Plan.

Another graphic example that will help illustrate what the code means in visual terms relates to height. Under the proposed ordinance, the typical height limit for single-family homes remains unchanged, capped at 35 feet. One variation from the existing ordinance covers high density residential development. The existing regulations allow for structures of 60 feet. Under the proposed code, the maximum height of residential structures in the Residential High Density District (R-H) would be reduced to 45 feet. The graphic shows both of these height scenarios. R-E (estate), R-L, and R-M fit within the example on the left. R-L would allow for heights corresponding with the example on the right.

The next post will deal with similar issues for non-residential districts.
Posted by BPS Christopher at 3:58 PM