Structures within the Town Center have the opportunity to build at a higher urban scale than other portions of Whitehouse. To help mitigate this aspect of the Town Center development pattern, a buffering requirement is included in the proposed code.
The existing buffering element for zoning within Whitehouse utilizes setbacks exclusively. The proposed code language would introduce the concept of a sky exposure angle. In short, the height of a building cannot exceed the height of a visibility angle as viewed from a protected land use. The goal is to minimize the impact tall buildings may have on existing single-family homes just outside the district. In addition to the sky exposure angle, the proposed code calls for a solid masonry fence and screening trees near the common border.

The concept is described in the following illustration. In this example, Town Center buildings are shown abutting existing single-family homes (the back yards and rear of the homes is shown on the right side of the image). The height of the buildings would be limited based on the 45 degree visibility angle. As shown, buildings could not reach their full allowable height near the common border. The other buffering elements such as the fence, trees, and setback are also included. 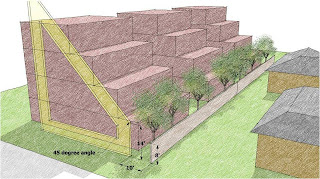 Posted by BPS Christopher at 9:57 PM